The Florida Everglades is located in the Miami-Dade, Monroe, and Collier counties of South Florida, at the southernmost tip of the peninsula.1 (Image 1) The Everglades is an expanse of predominantly sawgrass marshes, mangrove forests, and hardwood hammocks dominated by wetlands and spotted with small islands of trees.2,3 Water in South Florida once ran from the Kissimmee River to Lake Okeechobee to the Florida Bay and is historically a home to a great variety of wildlife including alligators, crocodiles, snakes, panthers, otters, raccoons, and thousands of birds; including great egrets, white ibis, herons, and wood storks.4,5 (Image 2) 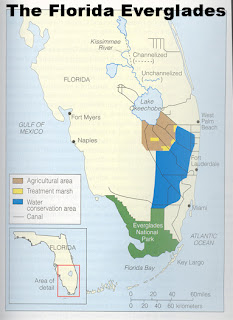 Image 2 from ThinkQuest.org
This blog will argue the negative impact of anthropological urbanization and agricultural exploitations of the Everglades. This blog argues that humans are the largest cause of degradation in the Everglades. There are prospects of restoration. However, repairing the Everglades will be an extremely slow, and expensive, process.
* * *
Today, the Everglades make up 0.8 million hectares (2 million acres), about half its original size pre-1850s (Second Industrial Revolution). The area now homes 50 endangered or threatened species. These drops in numbers are largely due to more than 70 years of anthropogenic engineering projects, including agricultural and residential development in dried areas and projects created to protect humans from storm-related flooding. These dry areas throughout the Everglades are created by flood-control measures and the diversion of natural water flow for agricultural use. Rapid population growth and urban expansion require massive supplies of fresh water; pumping ground water via canals for human consumption diminishes the flow of surface water through the Everglades natural drainage system. This causes stagnation, which leads to habitat fragmentation and a decline in wildlife populations. The quantity and quality of water flowing into and through the Everglades has also been reduced due to contamination by fertilizers and pesticides used for agricultural purposes.7 (Image 3) 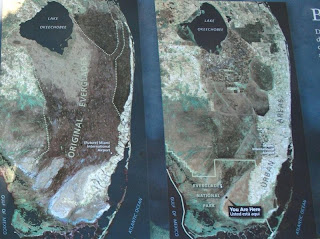 Image 3 from TravelBlog.org8
Although the Florida Everglades will never completely be restored to its natural, original condition because the presence of too many sugar plantations (which disrupt water flow) and cities in the region, state and federal governments have worked and are working on massive restoration projects to undo some of the damage.9 In 1948, Congress attempted to alleviate the crisis when it authorized the U.S. Army Corps of Engineers to construct a system of roads, canals, levees, and water-control structures throughout South Florida to provide water and flood protection, while helping to preserve the Everglades.10 However, the alteration of the wetlands combined with an increase in population damaged the natural system.
Currently, the state and federal governments are proposing a plan in which there are tighter controls on agricultural runoff and some of the agricultural land is converted back to marshes. Additionally, they want to re-engineer the area’s entire system of canals, levees, and pumps so that a more natural flow of water will be restored. (Image 4) These restoration efforts will likely take more than 20 years to complete (as increasing water temperatures, changes in precipitation, and more extreme storms will likely make restoration more difficult) and cost $8 billion.11 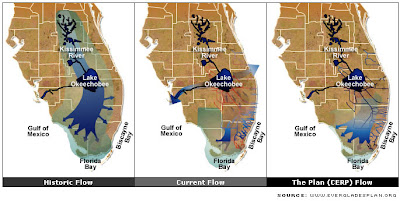 Image 4 from National Science Foundation
Human impact on the Florida Everglades is consequential. The rapid population growth in southern Florida requires thousands of acres of swamplands to be logged and drained for residential and agriculture uses. A transformative change has occurred in the everglades because of human activity. Specifically, where it was once a wet and mucky land, it is now used for building homes, agriculture, sugarcane fields, grazing cattle, and agriculture. Additionally, massive supplies of fresh water, and agriculture consumes more water. The water used for humans is pumped from the ground water and diversion of surface water via numerous canals. The net consequence is a diminished flow of surface water through the Everglades drainage system. Surface water in the Everglades is naturally nutrient poor. However, upstream agricultural runoff delivers large quantities of fertilizer, namely nitrogen and phosphorus, to the Everglades. Sawgrass prairie has converted to cattail marsh, with deleterious effects on organisms and water quality.
Human needs and activities to fulfill those needs have completely changed the ecosystem. Human impact has consequently altered drainage patterns, destroyed wildlife habitat, and transformed the natural process of filtration of the wetlands. In short, the U.S. Geological Survey website underscores the following human impacts on the coastal marine environment of South Florida. These include:
Lastly, it is important to note that more than 50% of the original wetlands have been destroyed. The degradation of the wetlands has been significant. In turn, direct consequences are affecting both the ecosystem and humans as well. The wetlands provide many benefits for humans; including acting as natural water collection areas, helping to recharge the water table and underlying aquifers, filtering out pollutants and purifying the water that seeps down through them, and helping to control flooding and maintaining water quality. The wetlands are also used for recreational activities like fishing and bird-watching. Therefore, it is imperative to recognize and acknowledge these human impacts and make people aware what the consequences of their activities are creating in the Florida Everglades.12
Past, present, and future: In 2007, Congress passed the Water Resources Development Act, which authorizes new projects under the 30-year, $10.9 million Comprehensive Everglades Restoration Plan (CERP) and includes authorization to fund previously authorized projects at today’s costs.13 Since 2000, Florida has invested $2.4 billion to the $13.5 billion state-federal CERP, which provides a framework to restore, protect and preserve the water resources of central and southern Florida by capturing fresh water that currently flows, unused, to the ocean and redirecting it to areas that need it most.14 Farmers will continue to improve farming practices, which have prevented more than 3,500 metric tons of phosphorous from entering the Everglades thus far, and treat storm-water in their 45,000 acres of Storm-water Treatment Areas. These treatment areas are man-made wetlands that naturally filter phosphorus pollution from water before it enters the Everglades.15
Global Temperature Changes (1860-2000)
Year Change in Average Temperature (oF)
1860 -0.78
1880 -0.5
1900 -0.6
1920 -0.6
1940 0
1960 +0.05
1980 +0.1
2000 +0.5
Adapted from EAP 16
The above table shows the general trend towards warmer climates in the past 150 years. This trend continues today and will continue into the future. Thus, it is evident that, even while humans attempt to restore the Everglades, the Everglades will continue to perish under the increasing global temperature. The Everglades will respond to continuous climate increases with loss of tree islands due to artificially long hydroperiods and deep water. Twentieth century water management practices will use more water as the need for water in hotter climates will increase. An increase in climate will also correlate with a larger frequency of natural storms, such as hurricanes. These, in additional to human practices have the potential to further devastate the Everglades.17

Image 5 from National Science Foundation
The above table strenghtens our research findngs. Bioaccumulatin is a direct consequences to the degredation of the Florida Everglades. High concentrations of mercury in Everglades fish, birds, and other organism is a result of food web bioaccumulation of methylmercury, which originates primarly at the sediment and periphyton-water interface.18

Image 6 from National Science Foundation
Distribution of flow from nine monitoring stations in northeastern Florida Bay, 1996 to 2007. This table demonstrates how the distribution of water flow from these various sites in the Florida Everglades are significanty affected by the lack of natural buffer barriers that would proctect from floods. Additionally, the failed canals to bring back the everglades to its original state also show little improvement on the conditions of water flow based on the table above.

This table is an extracted example from Image 6, showing the particular water flows from West Highway Creerk. The flows show dramatic irregular patterns.